Rain of Gold Tree on the grounds of Cuernavaca’s 16th century Cathedral. Photo by Benjamin Cordova.

One of the world’s leading centers for teaching Spanish to foreigners is fighting to recover from several years of setbacks, particularly an unfair image problem from international reportage on the drug war. Enrollments in the numerous private language schools have plummeted in Cuernavaca, capital of the state of Morelos and a resort city in central Mexico an hour south of Mexico City, previously host to thousands of foreign students per year. Local educators decry the unwarranted perception of the city as dangerous, but see hopeful signs in promising political and social changes in the state. Both the city’s rise to prominence in international education and its current predicament have been a long time evolving.

Known as the “city of eternal spring” for its superb climate, Cuernavaca became the largest center in the hemisphere for Spanish-language study beginning in the 1960s. What began as a program to teach Spanish to American and Canadian missionaries soon attracted college students and staffers from international businesses, airlines, and governments.  The schools hosted ambassadors to Mexico and embassy employees from the U.S., Canada, Australia, and New Zealand.  Popular vocalist Linda Ronstadt studied in Cuernavaca in 1987 prior to recording her hugely successful album, Canciones de mi Padre (Songs of my Father).  By then  the resort city in the Sierra Madre  became second only to Salamanca, Spain as a center for Spanish-language classes in over 25 private institutions. So the infrastructure was already well-established when the launching  of the North American Free Trade Agreement (NAFTA) in 1994, caused enrollments to skyrocket. During the 1990s probably ten thousand students a year  took classes ranging from a few weeks to an entire semester.

Most schools have lovely gardens appropriate to the superb climate in “the city of eternal spring.” Photo courtesy of Universidad Internacional, UNINTER.

But registrations began a significant downturn several years ago. The first of three painful blows to the city came with the collapse of the U.S. economy in 2008, bringing austerity to many businesses, impacting international travel in general, and making study-abroad financially more difficult. Right on the heels of the economic downturn came the H1N1 influenza pandemic in 2009 when enrollments in the schools fell dramatically, although Cuernavaca had a low incidence of the disease.

Students socialize around the pool.
Photo courtesy of CHAC MOOL.

Study-abroad students from the University of Minnesota pose for a group photo. Courtesy of CEMANAHUAC.

Small classes can meet outdoors thanks to Cuernavaca’s superb climate. Courtesy of ENCUENTROS.

The third and most critical blow has been the alarmist international publicity from  President Felipe Calderón’s war on the drug cartels.  Calderón’s  sexenio or six year term, 2006-2012, saw an estimated 50 thousand criminal related deaths  as the cartels responded viciously to the attack on their livelihood.

Alarming press reports overlooked the fact that Mexico’s homicide rate is 18 per 100 thousand inhabitants, moderate compared to many other places including, Brazil at 22, Puerto Rico at 26, and Honduras at 82 (“Drug Violence in Mexico,” Trans-Border Institute, University of San Diego, March 2012). Most Mexican cities have homicide rates lower than comparably-sized cities north of the border. The homicide rate in 2010 in New Orleans was over 52 per 100 thousand population, yet tourists travel there safely in large numbers. According to the U.S. State Department, “The number of U.S. citizens reported…as murdered under all circumstances in Mexico was 113 in 2011 and 32 in the first six months of 2012.” Only four of 31 Mexican states are included in the U.S. State Department’s warning to avoid non-essential travel. But perception is more important than reality and Mexico dropped off the map of favored tourist destinations.

Language-school excursions feature cultural sites like the pyramids at nearby Xochicalco where this group from Saratoga High School (CA) enjoys a visit. Photo courtesy of UNINTER.

People in the local tourist industry lament what they see as the unfairness of the collapse since the violence in Morelos is almost entirely criminals killing other criminals. It is clear that students and other foreign tourists have not been the targets nor the victims of the violence.  The U.S. Department of State Travel Advisory, updated November 20, 2012, does not call on Americans to defer non-essential travel to Morelos.   Its brief statement reads:

You should exercise caution in the state of Morelos due to the unpredictable nature of TCO [transnational criminal organization] violence. On August 24, two USG employees were injured after being fired upon by Federal Police officers on an isolated road north of Tres Marias, Morelos. Numerous incidents of narcotics-related violence have also occurred in the city of Cuernavaca, a popular destination for U.S. students. 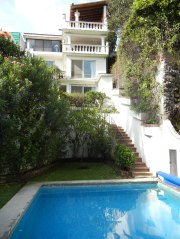 Today the schools are optimistic that reduced violence and promising political changes will help boost admissions. The Economist reported (Nov. 22, 2012) that “the level of violence in Mexico seems to have stabilized for the first time in six years” with 22 percent fewer drug-related executions in 2012 compared to 2011. Other signs hold promise for an uptick in travelers. The new President of Mexico, Enrique Peña Nieto and the new Governor of Morelos, Graco Ramírez have made reducing violence priorities in their administrations. A new Cuernavaca mayor, Jorge Morales Barud, took office January 1, 2013, bringing some fresh ideas for urban improvements. The governor and the mayor, though of different parties, have promised to work together on reviving Cuernavaca’s economy and improving  security. The governor and newly-appointed State Secretary of Tourism, Jaime Álvarez Cisneros, have made promoting the schools one of their priorities. Further good news came in March 2013 when the California State University 2007 ban on study-abroad programs in Mexico.

Given the preponderance of students from the U.S., schools tend to celebrate U.S. holidays like the 4th of July. Photo courtesy of UNINTER.

So is Cuernavaca a safe place for foreign students to study Spanish?  Locals here say absolutely. Smart travelers to any large city in the world know to stay in tourist areas, avoid danger zones, and take logical precautions. Meanwhile, some schools are already experiencing a pickup in university and high school group arrivals. Some of the smaller schools are still suffering, but several others reported enrollments of 25 to 50 foreign students during the January and February and spring breaks.  About a dozen U.S. colleges have already committed to summer programs in several different language schools. More high schools would surely commit were it not for liability insurance issues due to the State Department advisory.

Students enjoy practicing their Spanish around town, like these students in the public market. Photo courtesy of CETLALIC.

In addition to group  arrivals, business and diplomatic personnel are trickling back with individual reservations from Samsung, Suntory, Coca Cola, and Scotia Bank among others. Foreign service personnel continue to arrive from New Zealand and Canada. Independent students have registered from the U.S., Canada, Brazil, Switzerland, Sweden, Germany, Japan, Korea, Australia, Trinidad, and the Bahamas. Cuernavaca’s educational community hopes that improving numbers will soon translate resilience into resurgence.

The author is Associate Professor of History Emeritus at the State University of  New York (SUNY) College at  Brockport and former coordinator of the SUNY study-abroad program in Cuernavaca. As President of Educational Travel Service (now retired) he organized and led over one hundred tour groups to Mexico, including 80 programs in Cuernavaca for Road Scholar (Elderhostel). He is the author of Cuernavaca, A Guide For Students & Tourists, an e-book available at Amazon.com; information on his blog,  https://jimhornnews.wordpress.com.

The cover of the author’s Guidebook available as an E-book from Amazon.com.