On June 8, 2013, Mexico lost a talented artist and brilliant lecturer, Rolando Guillermoprieto, who died in Cuautla,Morelos after a long and courageous struggle with cancer.

He was born in Mexico City in 1938 but lived in Miami, Florida, London,England, and Nassau Bahamas, among other places.  He studied at St. Bernardine’s College, in Buckingham, 52 miles from London, a boarding school run  by the Franciscans. At age 17 he lived with his brother in Laredo, Texas and began painting. Returning to Mexico City in 1957, he met numerous important artists and began to define his own style.  After further travels to the Bahamas in 1963 and marriage to his wife, Jacqui, he returned to Mexico in  1968 and opened the gallery Calmecac in Cuernavaca, Morelos. 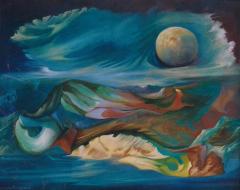 In Cuernavaca he met Ivan Illich who invited him to teach Mexican history and culture at CIDOC (Intercultural Documentation Center). He also lectured at Centro Bilingue (now part of Universidad Internacional) where he taught art history and was commissioned to paint the mural “Cosmovision.” He also lectured at the Spanish Language Institute and and to numerous public groups.

In 2004 he moved to Cuautla, Morelos where he taught courses on painting and muralism in his studio and collaborated with a study abroad program of Earlham College. His Omeyocan Workshop students created 9 murals, all donated to the local Social Security Institute.

His colleagues remember him as a brilliant lecturer with a quick wit and gregarious personality.  Condolences to his wife Jacqui and family. His web page has not been updated but we hope it will soon be a memorial to his talents. All photos courtesy of his web site  (www.rguillermoprieto.com.mx).