(All photos by the author. Click on them to enlarge them and to read the captions, and use your arrows to scroll forward and reverse. I did not switch to a Portuguese keyboard so the text lacks proper accents and diacritical marks).

Friends who had visited the Portuguese island of Madeira had raved about it to me and the TAP airfare I booked NY to Portugal allowed me a layover there for very little extra cost. I booked three nights there prior to a Duoro River cruise from Porto. TAP flies to Portugal from both Newark (EWR) and New York-JFK. I chose Newark for the departure since the connection to Funchal in Lisbon got me to Madeira by 11 am the next day, but the JFK schedule would have delayed my arrival until late afternoon. I booked the return from JFK since there are more choices to Rochester NY while Newark limits one to United.

TAP provides a relaxing business-class atmosphere with excellent service, good food, and generous spirits. I ignored the travel-literature advice that drinking worsens jet lag since Glenlivet promotes relaxation. The overnight flight took less than seven hours so, by the time dinner was served there wasn’t much sleep time.  I spent several hours with my Portuguese grammar-review book and dozed for a just a few hours before being awakened for breakfast an hour out of Lisbon.

The bleary-eyed passengers lined up at passport control behind a few other large passenger groups that arrived about the same time. I trudged through the great hall for nearly 90 minutes before getting the stamp, and there were at least 100 people behind me. The European Union members have an express line and there is one window for those in wheel chairs or on crutches. But there were many exhausted elderly in the line who got no privileges. Then the line for security to connecting flights took another twenty minutes or longer. There were plenty of ATMs in the terminal and I got euros for 1.11 US. I did have three hours to spare before the connection to Madeira (I would not recommend anyone booking less time between flights in Lisbon) and I had 90 minutes in the VIP lounge before boarding the express jet to Funchal. TAP’s express jets are economy class only with three seats across on each side, a staircase to climb instead of a jetway, and another staircase on arrival in Funchal with a bus from the tarmac to the terminal.

The airport in Funchal was recently renamed in honor of Madeira’s favorite son, soccer star Cristiano Ronaldo. Alas, the bronze bust of him at the entrance is so ghastly press photos created world-wide mockery when it was unveiled.

I could have pre-arranged a car pickup online, but fearing flight delays I took my chances with taxis in Funchal. They were plentiful and metered and I got to my hotel in 20 minutes for 38 euros, a bit steep compared to the return fare of 30 euros with a taxi the hotel booked. Perhaps the first driver took the long way.

I had searched several websites before choosing a hotel with http://www.booking.com which offers reviews of the properties and choices of room categories. My choice was Golden Residence Hotel at a price less than 100 dollars a night (297 USD, 282 euros, for three nights) for a “Double room with side sea view,” actually a nice little terrace overlooking the pool. A generous buffet breakfast and free internet were included. What a bargain compared to most European resorts.   (www.goldenresidencehotel.com.)

Of course, my arrival before noon meant I could not check in until 2 pm, but luckily I was awakened from a doze in the lobby by 1:30 and escorted to a spacious room with a double bed. I wanted to check e-mail after 18 hours in transit, but the desk (unlike hotels in Lisbon) did not have adaptors to lend. Fortunately there is a huge shopping mall a few blocks from the hotel and an electronics shop had a universal adaptor for just ten euros.  I also picked up sandwich-makings and juice in a huge supermarket in the mall and I stocked my fridge-bar for three days. Next a welcome siesta before heading to the pool for an hour of aerobics and sun which seemed to be the perfect antidote to jet lag. Temperatures were about 75 degrees by late afternoon and the pool had full sun so the water temperature was just slightly chilly. I warmed up in the sun for an hour with my language text before showering and looking into dinner choices.

From the hotel one can walk, jog, or bike along a beautiful ocean-front promenade with beautiful scenery. 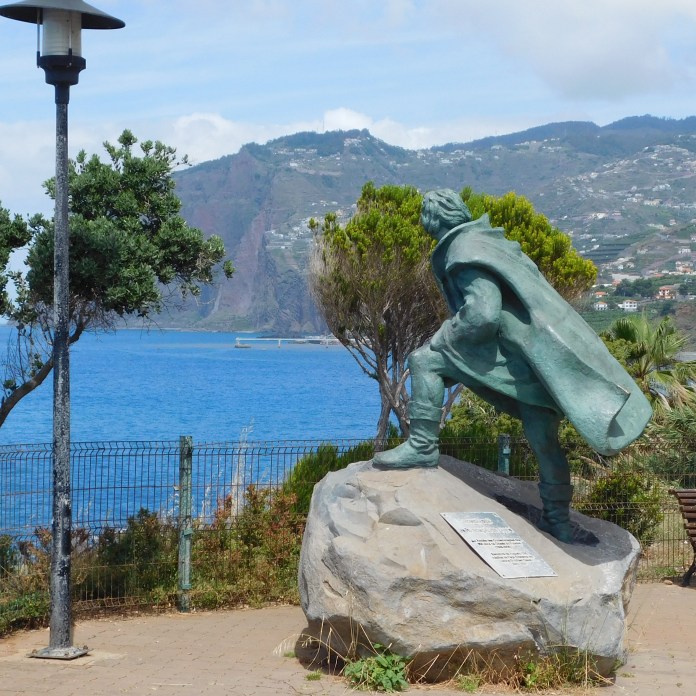 The statue to Carvajal, the discoverer of the island.

The hotel featured a different ethnic buffet each night as well as an ala carte menu, but I was not inspired by a 36-euro Italian buffet on my first night in Madeira. I asked a receptionist if there was a seafood restaurant nearby and she sent me on a ten -minute walk  down the hill toward the beach where I found a beautiful bistro overlooking the water. I was fortunate enough to get the last table at 7:30 pm. (There is a smaller seafood restaurant without a view and a Mexican steak house closer to the hotel).

Restaurant  Doca do Cavacas  (Doca means bay and Cavacas is a family name) is without a doubt one of the most beautiful seafood restaurants I have ever enjoyed, not so much for its furnishings but for its outdoor terrace on a bluff overlooking the Atlantic. The menu overflowed with tempting seafood offerings. The pleasant waitress spoke Portuguese and English  and told me I could have a half-portion of a 45-euro mixed seafood grill for 25 euros, an incredible bargain given that I expected such a divine place to have celestial prices. I foolishly ordered mussels as a starter, not realizing the size of the huge platter that followed: four pieces of fish including robalo (seabass) and red snapper, two huge prawns, some squid, and two mussels. Then came a platter of French fries and a huge portion of steamed cabbage and carrots which I turned away knowing I couldn’t eat all that. The house white wine was fine and I departed feeling that it had already been worth the detour to Funchal. 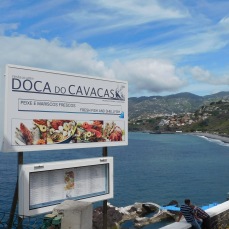 The walkway to the restaurant is just the beginning of the great views. 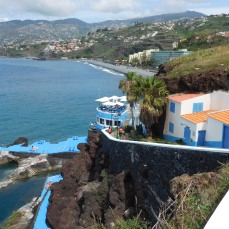 What a sensational setting for a restaurant. 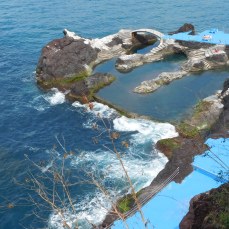 Atlantic sea-water fills the natural swimming pools below the restaurant. 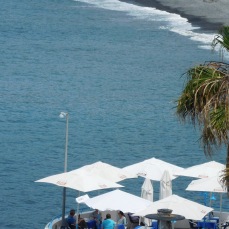 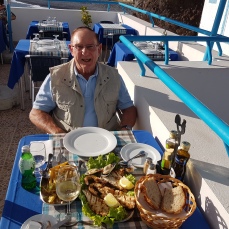 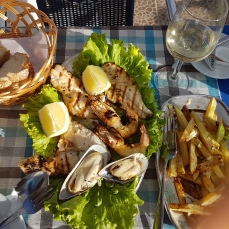 This is a half-portion of the mixed seafood platter.

The Golden Residence Hotel offers a large breakfast buffet including an egg station on alternate days and I enjoyed an omelet, sausages, and fruit, with good black coffee. Later I asked at the desk where I could get the Yellow Tour Bus, an upper decker that circles the city. What great news that it stops in front of the hotel. On the downside, it stops at a dozen hotels before winding its way through city center and up into the hillsides for a nice view of the city. I didn’t get off but just oriented myself to my location and decided where I would walk to the next day. A local bus also stops in front of the hotel on a frequent basis for those just wanting to go into city center. The two-hour tour was relaxing and offered excellent photo opportunities like those below. 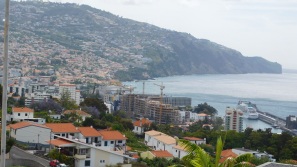 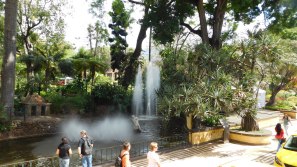 Back at the hotel I worked out for only 30 minutes in the fitness center which is not well-equipped.  I had a sandwich in the room before my siesta, then returned to the delightful pool for more aerobics and sun. I had no intention of exploring the entire Island and skipped the many hiking excursions offered at the desk. I had planned on relaxing and working on Portuguese language prior to the cruise. While resting, I started posting photos on facebook so I would have a record of dates and places to remember later. If I wait a few weeks I can’t remember the details of some of the photos.

It was a no-brainer where I would have dinner, so I hiked back to Doca do Cavacas and found lots of empty tables at 7 pm, though it was crowded when I left. I skipped the starter and enjoyed the mixed seafood platter again, then indulged in a passion-fruit mousse before heading back to the hotel to rest with a nightcap and a John Sandford novel. I skipped the nightlife since most venues pick up after midnight.

If there is a garden nearby I usually find it and I was delighted to find the Monte Palace Tropical Garden. Two hours were not nearly sufficient to do justice to the enormous botanical garden comprising 70 thousand square meters. At about 3000 feet above Funchal, the garden boasts flowers from all over the world, a few of which I did not recognize. One can take a bus or taxi to the garden but the best way is to take the funicular from the city center where one can buy a roundtrip ride up the mountain and a garden-entrance package.  One needs good walking shoes here for it is up and down steep hills and staircases for at least 90 minutes to two hours. Below is just a sample of the floral delights.

After taking the funicular down to city center, I walked to the municipal market which was mobbed with tourists. Local people actually buying vegetables and flowers had to be annoyed at all the photo-snappers intruding on their turf. I had to do a lot of cropping to eliminate the tourists from the photos.

I didn’t have the energy to walk further through the old city and its parks so I took a taxi back to the hotel where I finished my lunch provisions before a siesta and a return to the pool. That evening I opted for the hotel buffet since it was seafood, but it was a real disappointment after the restaurant on the water. Then a nightcap and early to bed due to a very early wakeup Saturday.

Sat. May 20: Departure for Porto, Portugal.

TAP gave me a choice of flights from Funchal to Porto at 7 am or 5 pm, the latter meaning I would lose the whole day in Porto, so I was up at 4:30 am. The hotel arranged a taxi the previous night and the friendly driver spoke slow, clear Portuguese and my confidence was improving a lot. I had a quick check in, an executive security line, and use of the VIP lounge where I got coffee and a sandwich. Arriving in Porto my luggage was on the carousel by the time I was out of the restroom and there were plenty of taxis waiting. It took about 25 minutes to get to the hotel Ribeira do Porto, right on the Duoro river. The next phase of my journey had begun.

It’s kind of silly to fly all the way to Madeira for a seaside holiday, especially for me with a place three hours from Acapulco. But if Portugal is your destination, or if you are connecting in Lisbon to another European destination, I highly recommend the island for a layover in either direction. Madeira really lives up to its fame as an island paradise and costs are considerably less than other resort areas I have visited in Europe. The people are friendly and helpful, all the staff in tourist venues speak English, and the climate is superb. It really is worth considering in your travel plans.

COMING NEXT: A DUORO RIVER CRUISE  with  CROISI EUROPE 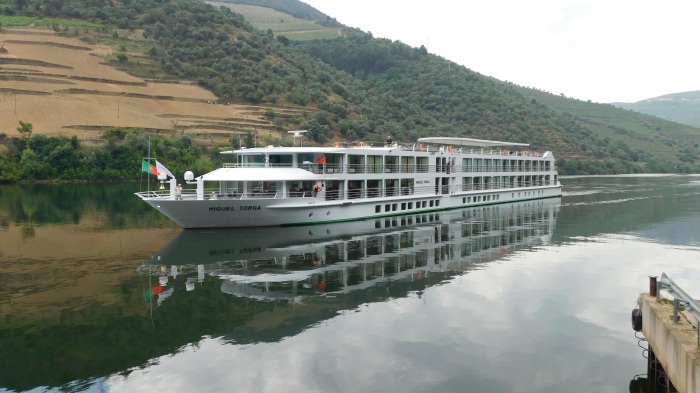 4 thoughts on “THREE NIGHTS IN THE PORTUGUESE PARADISE OF FUNCHAL, MADEIRA”