This post is an updated version of an article published in  LIVE & INVEST OVERSEAS, Feb. 13, 2013.   Click on the photos to enlarge them and read the captions.

I knew I would live one day in Cuernavaca  the first time I brought a group of students from freezing western New York for a College at Brockport study-abroad program and I found I could dine outdoors in January. After many winters directing the college program here, it was a no-brainer where I would retire. Often overlooked and unappreciated, Cuernavaca Mexico has more to offer tourists and retirees at lower cost than most other areas of the Republic. The  resort city  lies just 90 minutes south of the capital. Due to its near-perfect climate  “the city of eternal spring”  has attracted vacationers since the days of the Aztec emperors and the captains of Cortés. North American expatriates number only in the hundreds, but hundreds more snow-birds arrive for the winter months. While Brigitte Bardot and Helen Hayes drew attention to the city in the 1960s, it has always been much more popular among Mexicans than outsiders, and the population of about 800,000 swells by thousands on weekends and holidays. 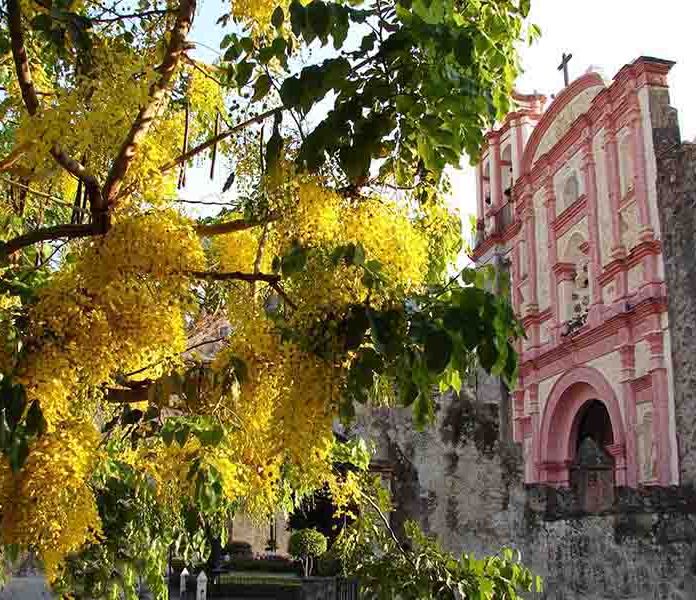 While often overlooked by foreigners, the city is unparalleled in the Republic for its remarkable climate, cultural life, security, cost of living, and medical care. Virtually every major U.S. airline serves Mexico City’s bustling modern terminal, with over a dozen flights daily  from Texas airports alone.  Deluxe buses make the 100-minute trip to Cuernavaca and back every 40 minutes for about sixteen dollars each way.

The climate is certainly one of the best in the world with a mean temperature of 75 degrees and over 300 days of sunshine.  Winter temperatures average at least ten degrees warmer than better-known San Miguel de Allende. Spring arrives in early February with daytime temperatures in the 80s falling to 65 at night until May, the hottest month with its occasional dog days. From June through mid-October, cooling rains arrive to freshen things up again.  Thanks to the evening showers in July and August, Cuernavaca is cooler than Alaska. The only steady daytime rains occur when there is a tropical storm in the Pacific or the Gulf of Mexico.

Like  many residents, I make day trips to the nearby capital for opera, dance, theater, and concerts,  but I am never bored locally. The salons at the Borda Garden,  a vacation retreat for Maximilian and Carlota in the 1860s, host numerous  concerts, plays, and art exhibits.  The Teopanzolco Cultural Center has weekly concerts and broadcasts the televised opera from New York saturdays in season. The  Teatro Ocampo, in a  beautifully renovated old movie house, has freequent dance and music concerts  including the Morelos State Ballet, the city chamber music orchestra, and visiting groups like the National Symphony and the Harlem Gospel Choir. Seat prices range from five to fifteen dollars. Several eight to ten-screen movie houses play the big Hollywood hits a few weeks behind the U.S. schedule for under five dollars.

Several outstanding museums provide a variety of artistic experiences. The Museo Cuauhnahuac in the Cortés Palace, has exhibits from pre-Columbian cultures, the colonial period, and the Mexican Revolution. (It is temporarily closed for reconstruction due to damage during the September 2017 earthquake).  El Museo de Arte Indígena Contemporáneo displays works from Indigenous artists of Morelos and other Mexican states. The Morelos Museum of Contemporary Art Juan Soriano (Museo Morelense de Arte Contemporáneo Juan Soriano) opened to the public June 8, 2018. Juan Soriano (1920-2006) was one of Mexico’s foremost 20th century artists. The sculpture garden alone demands a visit.  The Brady Museum holds an eclectic private collection of about 1300 works collected over many years by artist Robert Brady.

MAIC is located on a busy section of Avenida Morelos, Centro, 50 meters north of Jardín Borda. 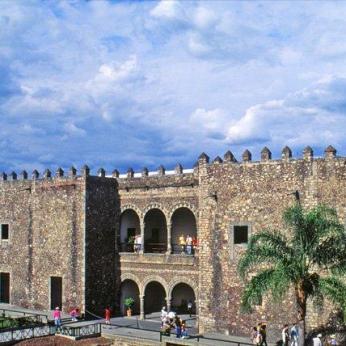 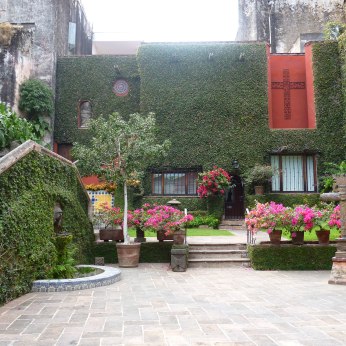 The entry to the Robert Brady Museum.

For a change of scenery it’s just a short bus ride to the “magic village” of Tepoztlán,  ancient haciendas like Cocoyoc and Vista Hermosa, the ruins of Xochicalco, or the silver city of Taxco. And now Cuernavaca is the gateway to the largest flower garden in the world, Jardines de México, just a half hour drive from the city. The glamorous beaches of Acapulco are just three hours away by car, four by bus. (See my post, Tourism Should be Coming up Roses in Morelos.”)

Sunset on the Italian Renaissance garden in Jardines de Mexico. 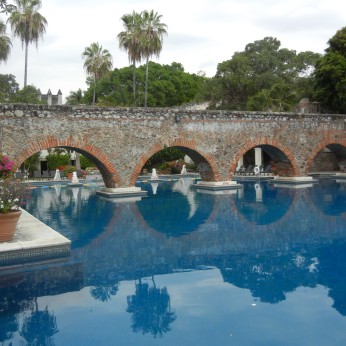 The pool at Hacienda Vista Hermosa is built around another ancient aqueduct. Photo by the author.

The pyramids of Xochicalco, one of the most popular excursions from Cuernavaca. Google images.

There are several  world-class restaurants with gourmet meals in alfresco settings and dozens of bistros better than most neighborhood restaurants in comparably-sized cities in the States, with prices at least 30 percent lower.  Hundreds of family restaurants offer a three-course lunch with a fruit drink for about three dollars, but my gourmand tastes draw me to restaurants like La Provence where chef Pascal serves authentic French and international dishes like Coq au Vin, Osso Bucco, or Chateaubriand. Las Mañanitas, one of the most renowned restaurants in the Republic, offers simple dishes like enchiladas or extravagant fare like lobster bisque and oysters Rockefeller, in a spectacular garden with strolling peacocks and African-crowned cranes. 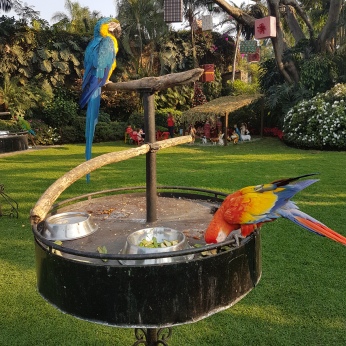 The garden at Hotel/Restaurant Las Mañanitas. 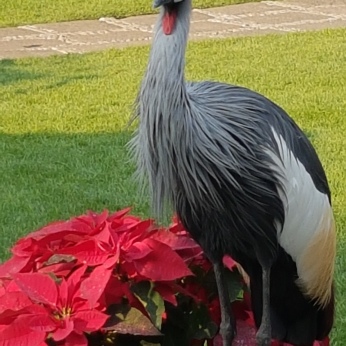 Cuernavaca’s low cost of living rivals most  other regions in the country. Deluxe hotels starting at 200 dollars per night compete with delightful four-star  hotels for 85 dollars and  30 to 40 dollar pensiones.  Modestly-priced  golf courses, tennis clubs, gyms, and spas abound. Because Cuernavaca is a year-round resort, rates do not vary seasonally, and apartment rents are usually half what they would be in Florida for a similar-sized unit. The economy has dipped and real-estate sales are down by about 40 percent, so bargains abound.  You can find a three-bedroom condo with a large shared garden and  pool for less than 100 thousand dollars, with monthly maintenance fees about 60 dollars and all taxes only a few hundred dollars  a year.  Utility costs are less expensive than in the States, especially since one can live without heat or air conditioning.  Inexpensive part-time and full-time help is easy to find. The shopping options will make you forget you are in Mexico. In addition to U.S chains like Walmart, Sam’s Club, Costco, and Sears,  huge shopping malls feature chic Mexican boutiques and plush department stores.

Given the nightmarish international publicity about Mexico’s drug wars, safety and security issues are obviously of concern.  Until recently Cuernavaca escaped the shootouts that characterize the hapless border cities.  Hence some drug lords took advantage to hide their safe houses in suburban residential developments and government forces have confiscated dozens of them. But the violence is a matter of drug lords killing other drug lords. Tourists and ex-pats are not the targets nor the victims. The murder rate is lower than that in cities of comparable size in the U.S  (See my post “Security Tops the Agenda in Morelos.”)

It’s amazing how many magazines on retirement and living abroad ignore their readers’ concerns for quality health care.  Unlike smaller retirement havens, excellent  medical and dental facilities are easily accessible in Cuernavaca. Those who need extensive dental work can pay for their vacation by visiting outstanding, inexpensive dentists here. At least two hospitals and a cardiac clinic are first rate. You don’t have to go far to find a well-trained specialist in cardiology, gastroenterology, obstetrics, plastic surgery, or optometry, including laser surgery. Reasonable insurance plans are available or Medicare coverage in a city like Houston is just a two-hour flight away. You can get emergency treatment or see a physician at the local Red Cross for under eight dollars.  The city even hosts the National School of Public Health, one of the most prestigious in the Americas. Nearby Mexico City boasts one of the best hospitals in the hemisphere. (See my post, “You Can Afford to Get Sick Here.”)

In the 1960s Cuernavaca was discovered by North American and European students attracted to schools specializing in teaching Spanish to foreigners. More than 30 North American universities send study-abroad students to schools boasting no more than five students per class. Such schools proliferated  making Cuernavaca perhaps the best place in the world to study Spanish. (See https://jimhornnews.com/2015/08/10/study-abroad-why-choose-mexico-its-preeminence-its-impediments). Alas, the U.S. perception of violence in Mexico caused a huge drop in enrollments so many classes have only two or three students per teacher now. For those too busy to enroll in classes, private tutors will come to your home for about ten dollars an hour.  And study you should because Cuernavaca is a thoroughly Mexican city, not a gringo town. The small ex-pat community offers occasional activities, but the city has no outsized foreign colony like some places where retirees expect the maid to learn English. You have to work a bit more in Cuernavaca, which might explain why  it has been relatively overlooked. Those, like me, who have come to feel at home here don’t want to live anywhere else.

James Horn, Ph.D., is Associate Professor of History Emeritus at the State University of New York College at Brockport where he coordinated the study-abroad program in Cuernavaca. He resides ten months a year in his favorite city. He is the author of Cuernavaca, A Guide for Students & Tourists, available from amazon.com.