UPDATE:  As of March 2021, the toll for the three minute drive has risen to 65 pesos, 130 pesos round trip, so most drivers take the old highway. (Local residents get a discount). Except at rush hour there is almost no traffic through the tunnel.  The price should be dropped to encourage more usage and cut traffic on the Carretera Escénica where major accidents are frequent. And at rush hour, one arrives in Cayaco to bumper-to-bumper traffic so the longer Escénica is actually faster.

A spectacular subterranean highway now connects Acapulco’s Zona Dorada with the newer Diamante area. Begun in 2013, it opened in mid-April 2017 after long delays due to a strike and closure by the National Water Authority. Anyone who has driven the Avenida Escénica from the Costera Alemán to Diamante at rush hour knows how scary that ride can be with many curves and heavy  traffic that is even worse during holiday weekends. And forget about it at night when one can hardly see the lines separating lanes and in many sections there is a ditch instead of a shoulder.

The Macrotunel begins at Brisamar at the end of the Costera hotel zone at the intersection of Avenida Escénica and Ejército Nacional and terminates near Cayaco at the Bulevar Tecnológico into Puerto Marquéz. There are three lanes one of which can be changed to accommodate a change in traffic flow. On a weekday morning after rush hour, I traversed the 3.2 kilometers from Brisamar in three minutes and arrived in Diamante in seven minutes. However, the seedy boulevard that joins the highway to the airport can be very slow at times due to construction. An extension is planned to take drivers closer to the airport, and eventually connect to the Autopista del Sol toward Mexico City. 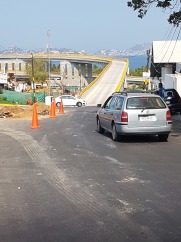 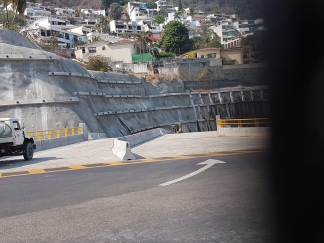 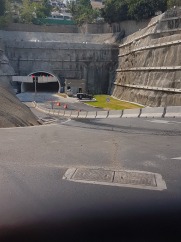 The construction is a master work of technology with enough steel and concrete to withstand earthquakes superior to 8 on the Richter Scale.  It is extremely well-illuminated using LED lighting. The cost was over 3 billion pesos, shared between state and federal funding. When all the connecting roads and ramps are completed, residents and tourists will marvel at the convenience provided by this amazing project.

Photos by the author. The speed limit is 60 km but everyone seems to do 80, not allowing for camera shots enroute. For interior photos do an internet search for “Macrotunel Acapulco.”